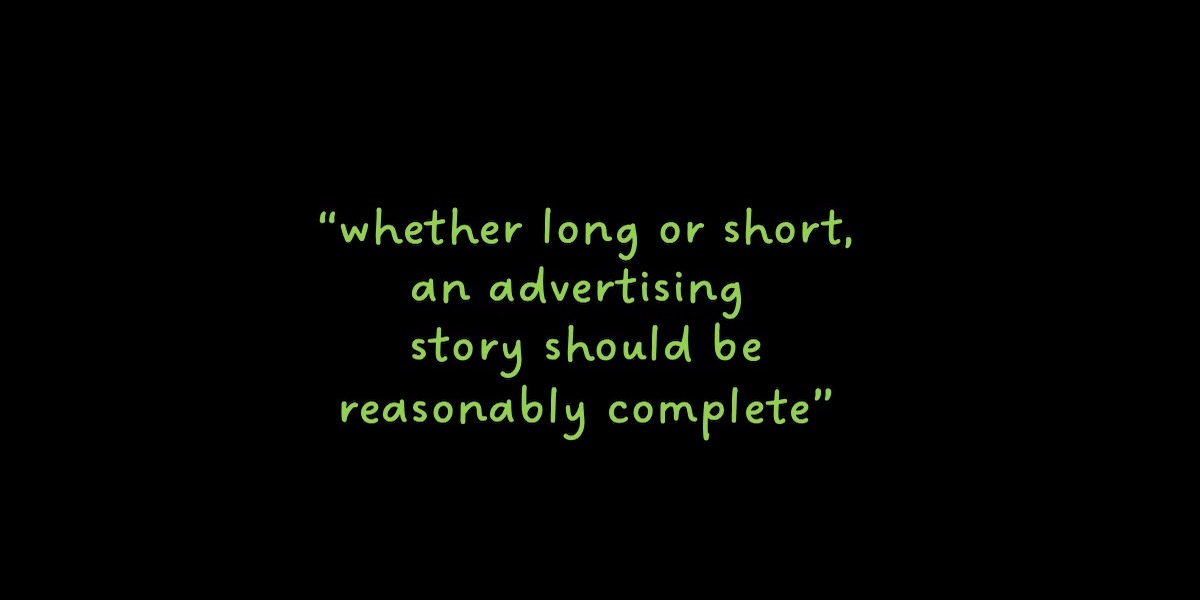 Whatever claim you use to gain attention, the advertisement should tell a story reasonably complete. If you watch returns, you will find that certain claims appeal far more than others. But in usual lines, several claims appeal to a large percentage. Then present those claims in every ad for their effect on that percentage.

Some advertisers, for sake of brevity, present one claim at a time. Or they write a serial ad, continued in another issue. There is no greater folly. Those serials almost never connect.

When you once get a person’s attention, then is the time to accomplish all you can ever hope with him. Bring all your good arguments to bear. Cover every phase of your subject. One fact appeals to some, one to another.

Omit any one and a certain percentage will lose the fact that might convince.

People are not apt to read successive advertisements on any single line. No more than you read a news item twice, or a story. In one reading of an advertisement, one decides for or against a proposition. And that operates against a second reading. So present to the reader, when once you get him, every important claim you have.

The best advertisers do that. They learn their appealing claims through tests – by comparing results from various headlines. Gradually they accumulate a list of claims important enough to use. All those claims appear in every ad thereafter.

The advertisements seem monotonous to the men who read them all. A complete story is always the same.

But one must consider that the average reader is only once a reader, probably. And what you fail to tell him in that ad is something he may never know.

Some advertisers go so far as to never change their ads. Single mail order ads often run year after year without diminishing returns. So with some general ads. They are perfected ads, embodying in the best way known all that one has to say. Advertisers do not expect a second reading. Their constant returns come from getting new readers.

In every ad consider only new customers. People using your product are not going to read your ads. They have already read and decided. You might advertise month after month to present users that the product they use is poison, and they would never know it. So never waste one line of your space to say something to present users, unless you can say it in your headlines. Bear in mind always that you can address an unconverted prospect.

Any reader of your ad is interested, else he would not be a reader. You are dealing with someone willing to listen. Then do your level best. That reader, if you lose him now, may never again be a reader.

You are like a salesman in a busy man’s office. He may have tried again and again to get an entree. He may never be admitted again. This is his one chance to get action, and he must employ it to the full.

This brings up the question of brevity. The most common expression you hear about advertising is that people will not read much. Yet a vast amount of the best-paying advertising shows that people do read much. Then they write for a book, perhaps – for added information.

There is a fixed rule on this subject of brevity. One sentence may tell a complete story on a line like chewing gum. It may on an article like Cream of Wheat. But, whether long or short, an advertising story should be reasonably complete.

A certain man desired a personal car. He cared little about the price. He wanted a car to take pride in, or else he felt he would never drive it. But, being a good businessman, he wanted value for his money.

His inclination was towards a Rolls-Royce. He also considered a Pierce-Arrow, a Locomobile, and others. But these famous cars offered no information. Their advertisements were very short. Evidently, the makers considered it undignified to argue comparative merits.

The Marmon, on the contrary, told a complete story. He read columns and books about it. So he bought a Marmon and was never sorry. But he afterward learned facts about another car at nearly three times the price which would have sold him the car had he known them.

What folly it is to cry a name in a line like that, plus a few brief generalities. A car may be a lifetime investment.

It involves an important expenditure. A man interested enough to buy a car will read a volume about it if the volume is interesting.

So with everything. You may be simply trying to change a woman from one breakfast food to another, one toothpaste, or one soap. She is wedded to what she is using. Perhaps she has used it for years.

You have a hard proposition. If you do not believe it, go to her in person and try to make the change. Not to merely buy the first package to please you, but to adopt your brand. A man who once does that at a woman’s door won’t argue for brief advertisements. He will never again say, “A sentence will do,” or a name claim or a boast.

Nor will the man who traces his results. Note that brief ads are never keyed. Note that every traced ad tells a complete story, though it takes columns to tell.

Never be guided in any way by ads that are untraced. Never do anything because some uninformed advertiser considers that something right. Never be led in new paths by the blind. Apply to your advertising ordinary common sense. Take the opinion of nobody who knows nothing about his returns.