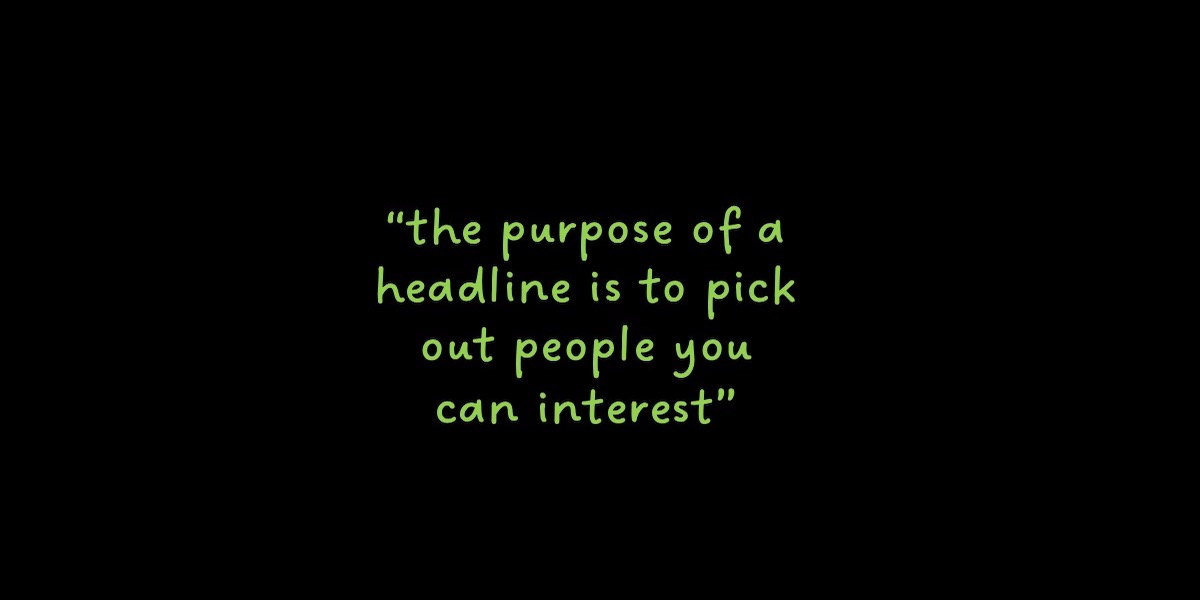 The difference between advertising and personal salesmanship lies largely in personal contact. The salesman is there to demand attention. He cannot be ignored. The advertisement can be ignored.

But the salesman wastes too much of his time on prospects whom he can never hope to interest. He cannot pick them out. The advertisement is read only by interested people who, of their own volition, study what we have to say.

The purpose of a headline is to pick out people you can interest. You wish to talk to someone in a crowd. So the first thing you say is, “Hey there, Bill Jones” to get the right person’s attention.

So in an advertisement. What you have will interest certain people only, and for certain reasons. You care only for those people. Then create a headline that will hail those people only.

Perhaps a blind headline or some clever conceit will attract many times as many. But they may consist of mostly impossible subjects for what you have to offer. And the people you are after may never realize that the ad refers to something they may want.

Headlines on ads are like headlines on news items. Nobody reads a whole newspaper. One is interested in financial news, one in politics, one in society, one in cookery, one in sports, etc. There are whole pages in any newspaper which we may never scan at all. Yet other people might turn directly to those pages. We pick out what we wish to read by headlines, and we don’t want those headlines to be misleading. The writing of headlines is one of the greatest journalistic arts. They either conceal or reveal an interest.

Suppose a newspaper article states that a certain woman was the most beautiful in the city. That article would be of interest to that woman and her friends. But neither she nor her friends would ever read it if the headline was “Egyptian Psychology.”

So in advertising. It is commonly said that people do not read advertisements. That is silly, of course. We who spend millions in advertising and watch the returns marvel at the readers we get. Again and again, we see 20 percent of all the readers of a newspaper cut out a certain coupon.

But people do not read ads for amusement. They don’t read ads which, at a glance, seem to offer nothing interesting. A double-page ad on a women’s dress will not gain a glance from a man. Nor will a shaving cream ad from a woman.

Always bear these facts in mind. People are hurried. The average person worth cultivating has too much to read. They skip three-fourths of the reading matter which they pay to get. They are not going to read your business talk unless you make it worth their while and let the headline show it.

People will not be bored in print. They may listen politely at a dinner table to boasts and

personalities, life history, etc. But in print, they choose their companions, their own subjects. They want to be amused or benefited. They want economy, beauty, labor savings, and good things to eat and wear. There may be products that interest them more than anything else in the magazine. But they will never know it unless the headline or picture tells them.

The writer of this chapter spends far more time on headlines than on writing. He often spends hours on a single headline. Often scores of headlines are discarded before the right one is selected. For the entire return from an ad depends on attracting the right sort of readers. The best of salesmanship has no chance whatsoever unless we get a hearing.

The vast difference in headlines is shown by keyed returns which this book advocates. The identical ad run with various headlines differs tremendously in its returns.  To . So we compare headlines until we know what sort of appeal pays best. That differs in every line, of course.

The writer has before him keyed returns on nearly two thousand headlines used on a single product. The story in these ads is nearly identical. But the returns vary enormously, due to the headlines. So with every keyed return in our record appears the headlines that we used.

Thus we learn what type of headline has the most widespread appeal. The product has many uses. It fosters beauty. It prevents disease. It aids daintiness and cleanliness. We learn to exactness which quality most of our readers seek.

That does not mean we neglect others. One sort of appeal may bring half the returns of another, yet be important enough to be profitable. We overlook no field that pays. But we know what proportion of our ads should, in the headline, attract any certain class.

For this same reason, we employ a vast variety of ads. If we are using twenty magazines we may use twenty separate ads. This is because circulations overlap and because a considerable percentage of people are attracted by each of several forms of approach. We wish to reach them all.

On a soap, for instance, the headline “Keep Clean” might attract a very small percentage. It is too commonplace.

So might the headline, “No Animal Fat.” People may not care much about that. The headline, “It Floats” might prove interesting. But a headline referring to beauty or complexion might attract many times as many.

An automobile ad might refer in the headline to a good universal joint. It might fall flat because so few buyers think of universal joints. The same ad with a headline, “The Sportiest Of Sports Bodies,” might out-pull the other fifty to one. This is enough to suggest the importance of headlines. Anyone who keys ads will be amazed at the difference. The appeals we like best will rarely prove best because we do not know enough people to average up their desires. So we learn each line by experiment.

Behind all lie fixed principles. You are presenting an ad to millions. Among them is a percentage, small or large, whom you hope to interest. Go after that percentage and try to strike the chord that responds. If you are advertising corsets, men and children don’t interest you. If you are advertising cigars, you have no use for non-smokers. Razors won’t attract women, and rouge will not interest men.

Don’t think that those millions will read your ads to find out if your product interests them. They will decide by a glance – by your headline or pictures. Address the people you seek, and them only.