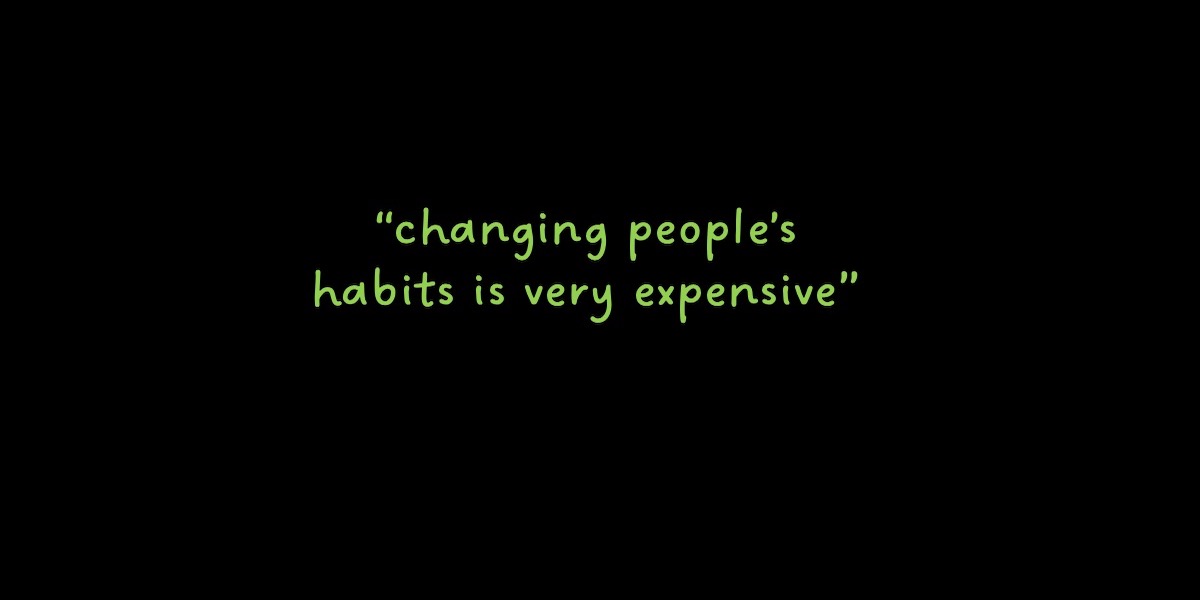 Many things are possible in advertising which are too costly to attempt. That is another reason why every project and method should be weighed and determined by a known scale of cost and result.

Changing people’s habits is very expensive. A project which involves that must be seriously considered. Yet countless advertisers try to do such things and results are traced but unknown.

For instance, the advertiser of a dentifrice may spend much space and money to educate people to brush their teeth. Tests that we know of have indicated that the cost of such converts may run from $20 to $25 each. Not only because of the difficulty but because much of the advertising goes to people already converted.

Such a cost, of course, is unthinkable. One might not in a lifetime get it back in sales. The maker who learned these facts through tests did not attempt to educate people about the toothbrush habit. What cannot be done on a large scale profitably cannot be done on a small scale. So not one line in any ad is devoted to this object. This maker, who is constantly guided in everything by keying every ad, has made remarkable success.

Another dentifrice maker spends much money to make converts to the toothbrush. The object is commendable but altruistic. The new business he creates is shared by his rivals. He is wondering why his sales increase is in no way commensurate with his expenditure.

An advertiser at one time spent much money to educate people about the use of oatmeal. The results were too small to discover. All people know of oatmeal. As a food for children, it has age-old fame. Doctors have advised it for many generations. People who don’t serve oatmeal are therefore difficult to start. Perhaps their objections are insurmountable. Anyway, the cost proved to be beyond all possible return.

Many advertisers know facts like these and concede them. They would not think of devoting a whole campaign to any such impossible object. Yet they devote a share of their space to that object. That is only the same folly on a smaller scale. It is not good business.

No one orange grower or raisin grower could attempt to increase the consumption of those fruits. The cost might be a thousand times his share of the returns. But thousands of growers combined have done it on those and many other lines. There lies one of the great possibilities of advertising development. The general consumption of scores of foods can be profitably increased. But it must be done with wide co-operation.

No advertiser could afford to educate people on vitamins or germicides. Such things are done by authorities, through countless columns of unpaid-for space. But great successes have been made by going to people already educated and satisfying their created wants.

It is a very shrewd thing to watch the development of a popular trend, the creation of new desires. Then at the right time offer to satisfy those desires. That was done on yeasts, for instance, and on numerous antiseptics. It can every year be done on new things which some popular fashion or widespread influence is brought into vogue. But it is a very different thing to create that fashion, taste, or influence for all in your field to share.

There are some things we know of which might possibly be sold to half the homes in the country. A Dakin-fluid germicide, for instance. But the consumption would be very small. A small bottle might last for years.

Customers might cost $1.50 each. And the revenue per customer might not in ten years repay the cost of getting. Mail-order sales on single articles, however popular, rarely cost less than $42.50 each. It is reasonable to suppose that sales made through dealers on like articles will cost approximately as much. Those facts must be considered in any one-sale article. Possibly one user will win over others. But traced returns as in mail order advertising would prohibit much advertising which is now being done.

Costly mistakes are made by blindly following some ill-conceived idea. An article, for instance, may have many uses, one of which is to prevent disease. Prevention is not a popular subject, however much it should be.

People will do much to cure trouble but people, in general, will do little to prevent it. This has been proven by many disappointments.

One may spend much money in arguing prevention when the same money spent on another claim would bring many times the sales. A heading that asserts one claim may bring ten times the results of a heading that asserted another. An advertiser may go far astray unless he finds out.

A toothpaste may tend to prevent decay. It may also beautify teeth. Tests will probably find that the latter appeal is many times as strong as the former. The most successful toothpaste advertiser never features tooth troubles in his headlines. Tests have proved them unappealing. Other advertisers in this line center on those troubles. That is often because results are not known and compared.

A man has a relief for asthma. It has done so much for him, he considers it a great advertising possibility. We have no statistics on this subject. We do not know the percentage of people who suffer from asthma. A canvas might show it to be one in a hundred. If so, he would need to cover a hundred useless readers to reach one he wants. His cost of result might be twenty times as high as for another article which appeals to one in five. That excessive cost would probably mean disaster. For reasons like these. every new advertiser should seek wise advice. No one with the interests of advertising at heart will advise any dubious venture.

Some claims not popular enough to feature in the main are still popular enough to consider. They influence a certain number of people – say one-fourth of your possible customers. Such claims may be featured to advantage in a certain percentage of headlines. It should probably be included in every advertisement. But those are not things to guess at. They should be decided by actual knowledge, usually by traced returns.

This chapter, like every chapter, points out a very important reason for knowing your results. Scientific advertising is impossible without that. So is safe advertising. So is maximum profit.