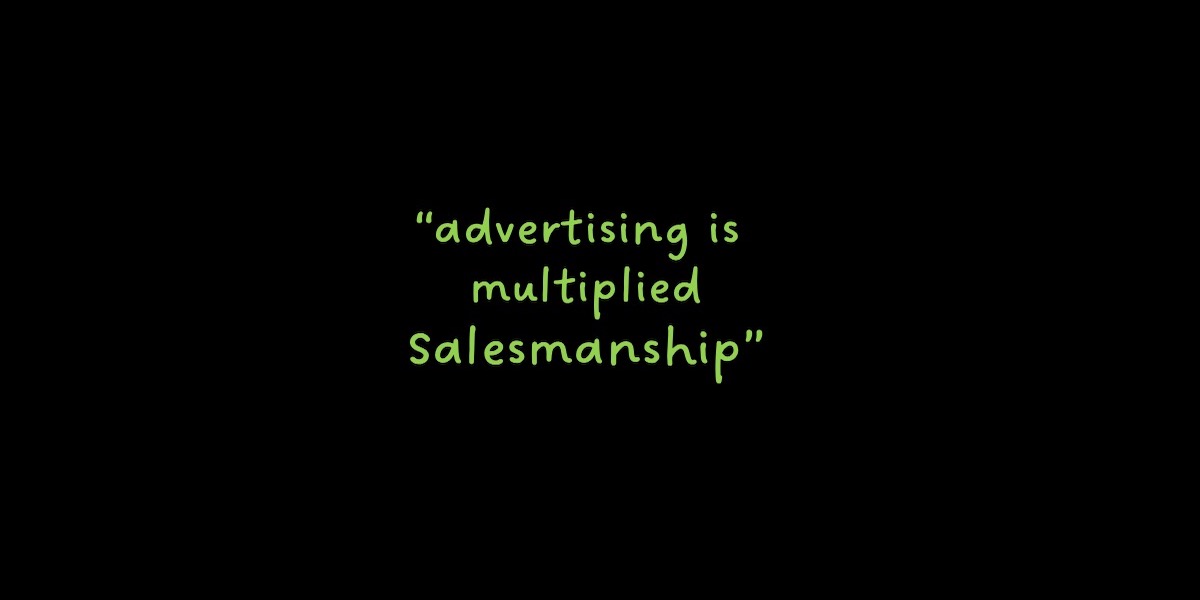 To properly understand advertising or to learn even its rudiments one must start with the right conception.

Let us emphasize that point. The only purpose of advertising is to make sales. It is profitable or unprofitable according to its actual sales. It is not for general effect. It is not to keep your name before the people. It is not primarily to aid your other salesmen.

Treat it like a salesman. Force it to justify itself. Compare it to other salesman. Figure its cost and result.

Accept no excuses which good salesmen do not make. Then you will not go far wrong.

The difference is only in degree. Advertising is multiplied salesmanship. It may appeal to thousands while the salesman talks to one. It involves a corresponding cost. Some people spend $10 per word on an average advertisement. Therefore every ad should be a super-salesman.

Many think of advertising as ad-writing. Literary qualifications have no more to do with it than oratory has with salesmanship. One must be able to express himself briefly, clearly and convincingly, just as a salesman must.

But fine writing is a distinct disadvantage. So is a unique literary style. They take attention from the subject. They reveal the hook. Any studied attempt to sell, if apparent, creates corresponding resistance.

That is so in personal salesmanship as in salesmanship-in-print. Fine talkers are rarely good salesman. They inspire buyers with the fear of over-influence. They create the suspicion that an effort is made to sell them on other lines than merit.

Successful salesmen are rarely good speech makers. They have few oratorical graces. They are plain and sincere men who know their customers and know their lines. So it is in ad-writing. Many of the ablest men in advertising are graduate salesmen. The best we know have been house-to-house canvassers. They may know little of grammar, nothing of rhetoric, but they know how to use words that convince.

There is one simple way to answer many advertising questions. Ask yourself, “Would it help a salesman sell the goods?” “Would it help me sell them if I met a buyer in person?” A fair answer to those questions avoids the countless mistakes. But when one tries to show off or does things merely to please himself, he is little likely to strike a chord which leads people to spend money.

Some argue for slogans, some like clever conceits. Would you use them in personal salesmanship? Can you imagine a customer whom such things would impress? If not, don’t rely on them for selling in print.

Some say “Be very brief. People will read for little.” Would you say that to a salesman? With a prospect standing before him, would you confine him to any certain number of words? That would be an unthinkable handicap.

So in advertising. The only readers we get are people whom our subject interests. No one reads ads for amusement, long or short. Consider them as prospects standing before you, seeking for information. Give them enough to get action. Some advocate large type and big headlines. Yet they do not admire salesman who talk in loud voices. People read all they care to read in 8-point type. Our magazines and newspapers are printed in that type. Folks are accustomed to it. Anything larger is like loud conversation. It gains no attention worthwhile. It may not be offensive, but it is useless and wasteful. It multiplies the cost of your story. And to many it seems loud and blatant.

Others look for something queer and unusual. They want ads distinctive in style or illustration. Would you want that in a salesman? Do not men who act and dress in normal ways make a far better impression?

Some insist on dressy ads. That is all right to a certain degree, but it is quite important. Some poorly-dressed men prove to be excellent salesmen. Overdress in either is a fault.

So with countless questions. Measure them by salesmen’s standards, not by amusement standards. Ads are not written to entertain. When they do, those entertainment seekers are little likely to be the people whom you want. That is one of the greatest advertising faults. Ad writers abandon their parts. They forget they are salesmen and try to be performers. Instead of sales, they seek applause.

When you plan or prepare an advertisement, keep before you a typical buyer. Your subject and your headline have gained his or her attention. Then in everything be guided by what you would do if you met the buyer face-to-face.

If you are a normal man and a good salesman you will then do your level best.

Don’t think of the people in the mass. That gives you a blurred view. Think of a typical individual man or woman who is likely to want what you sell. Don’t try to be amusing. Money spending is a serious matter. Don’t boast, for all people resent it. Don’t try to show off. Do just what you think a good salesman should do with a half-sold person before him.

Some advertising men go out in person and sell before they plan to write an ad. One of the ablest of men has spent weeks on one article, selling from house to house. In this way they learn the reactions from different forms of argument and approach. They learn what possible buyers want and the factors which don’t appeal. It is quite customary to interview hundreds of possible customers.

Others send out questionnaires to learn the attitude of the buyers. In some way, all must learn how to strike responsive chords. Guesswork is very expensive.

The maker of an advertised article knows the manufacturing side and probably the dealer’s side. But the very knowledge often leads him astray with respect to customers. His interests are not in their interests. The advertising man studies the consumer. He tries to place himself in the position of the buyer. His success largely depends on doing that to the exclusion of everything else.

This book will contain no more important chapter than this one on salesmanship. The reason for most of the non-successes in advertising is trying to sell people what they do not want. But next to that comes a lack of true salesmanship.

Ads are planned and written with some utterly wrong conception. They are written to please the seller. The interest of the buyer is forgotten. One can never sell goods profitably, in person or in print, when that attitude exists.